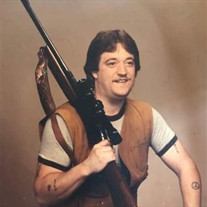 Daniel T. Kitchin Jr. “Bocky” Was born on January 31st, 1959 to the late Daniel T. Kitchin Sr. & Evelyn (Sweet) Bailey. He grew up with his father a workaholic, and his mother a homemaker/caretaker of him, and his many surviving siblings - Allen Kitchin, John Kitchin, Gary Kitchin, Jeffery Kitchin (Deborah Kitchin), Scott Kitchin, Sherry Kitchin, Mary Teeter, Barbara Wunderlich (Joseph Wunderlich), and Patrick Kitchin. Further, he is survived by (sisters) Helen Wilson, Norma Vangorden, Janet Hammond, Bonnie Dukes, by many grandchildren, great-grandchildren, cousins, nieces, nephews, and friends. He was predeceased by siblings Susan, Suzie, Mark, brothers-in-law Michael Teeter, Willie Dukes, as well as the late & dearly beloved Kenneth Mitchell, James “JD” Miller, and Patricia Miller whom he held close to his heart. Daniel grew up tough, in hard times, with a father who served in Pearl Harbor and likely suffered from that experience. He had to learn to fend for the family at an early age, and handle problems for the family early on in life. He was not easy to know in his early years, as he had fought against many things. Having met the first person who showed him love and empathy - Lois (Kingsbury) Martin, he left home in his teen years to start a 17 year relationship with Lois, having his first 4 children - Julia Foster (Sean Foster), Bocky Kitchin (Shannon Buzzetti-Kitchin), Daniel Kitchin III (Kelly Kitchin), and Kyle Kitchin (Elizabeth Kitchin). He and Lois later divorced. In the interim, he became a father for the 5th time to Victoria VanNess (Jeremy VanNess). He then sustained a 15+ year relationship with Tonya Mitchell, and took in her 3 children Eddie Mitchell, Daniel Mitchell, and Kristy Kiser as his own. Tonya and Daniel spent the next several years completing college, and working to improve their lives in some way. They enjoyed many times together, and also faced many tough times. Ultimately they parted ways and divorced approximately 2 years ago. This was especially hard for Daniel, as he loved both of his wives with all of his fiber but had lost them both in time. He tried hard to know how to express his love, and show positive emotion toward the ones he loved. It was never taught to him, and he tried to learn it the best he could. We all felt it, knew it, and appreciated it. He loved us all, and we all loved him dearly. He was a very bright, intuitive, and humble man who loved to build memories with his family. He was precise, systematic, and extremely particular in his ways. It protected him and us to keep things stable, orderly, and maintained in alignment. His heart was huge, and unconditional. He wanted so much more, but could not wrap his arms around it alone. He lived nearly the last decade alone, and struggled to make amends with himself and others in his past. He was content in his own environment, and didn’t stray far from that. Through the years he was a proud sportsman of hunting, fishing, and generally being outdoors with his brother Jeff & his sons. He loved music dearly - the one thing that he and family always enjoyed together. He taught us well through his actions, inactions, and consistent unwavering ways. We will love and miss him dearly. Rest peacefully father, brother, grandfather, great grandfather, uncle, cousin, and friend of ours; Daniel T. Kitchin Jr. Graveside service is being arranged at Woodlawn Cemetery, overlooking the Woodlawn National Cemetery and the gravesite of his late father and loved ones.

Daniel T. Kitchin Jr. &#8220;Bocky&#8221; Was born on January 31st, 1959 to the late Daniel T. Kitchin Sr. & Evelyn (Sweet) Bailey. He grew up with his father a workaholic, and his mother a homemaker/caretaker of him, and his many surviving... View Obituary & Service Information

The family of Daniel Thomas Kitchin Jr created this Life Tributes page to make it easy to share your memories.

Send flowers to the Kitchin family.