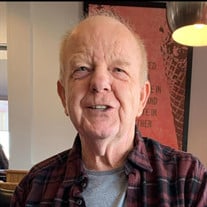 ELMIRA – Donald R. Ellis, 75, of Elmira, passed away on Friday, November 26, 2021, in the comfort of his home surrounded by family. Born on February 14, 1946 in Sayre, PA, he was the son of the Sterling Ellis and Marie Short. Donald served in the US Army during the Vietnam Conflict. On November 25, 1968, he married the love of his life, Sharon Cook. Donald worked as a Hub Operator for Pressware in Corning until his retirement in June of 2001. He enjoyed off track betting and was a diehard NY Giants and NY Yankees fan. He never missed a game! More than anything, he cherished the time he spent with his children, grandchildren and great-grandchildren. In addition to his parents, he was predeceased by his wife of 51 years, Sharon Ellis; and his siblings, Roberta Camacho, Kenneth Young, Gary Ellis, and Patricia Young Talada. He is survived by his daughters, Dawn M. (Todd) Lown of Wellsburg, Donna J. (Patrick) Pritchard of Elmira, Diane E. (William) Greeno of Elmira; his grandchildren, Heather (John) Shavalier of Elmira, Bryan Ellis (Bridgette Hetrick) of Elmira Heights, Brittnie Blow (Derek Harvey) of Elmira, Coby Greeno of Elmira, Nicholas Lown of Horseheads; his great-grandchildren, Peyton, Sebastian, Zander, Khloe and Oliver; and his brother, Harold Short Jr.. Friends may call from 1-3 pm on Wednesday, December 1, 2021 at Olthof Funeral Home, 1050 Pennsylvania Ave. in Elmira, with a service to follow at 3 pm. Contributions in Donald’s memory may be made to Chemung County Humane Society & SPCA, 2435 NY-352, Elmira, NY 14903.

The family of Donald R. Ellis created this Life Tributes page to make it easy to share your memories.

Send flowers to the Ellis family.