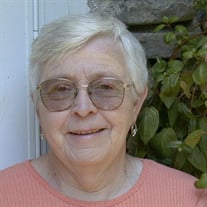 Eleanor Ray (Barr) Boesen, age 89, passed away peacefully on February 28, 2019 at Chemung County Nursing Facility in Elmira, NY after a nearly 20-year struggle with Alzheimer’s. Eleanor (Mitzi) was born December 11, 1929 to Archibald Anderson Barr and Josephine (Macorkle) Barr in Wilkes-Barre, PA. She grew up in Parsons, PA during the Depression under the protective wing of her older sister, Charlotte, and surrounded by the warmth and hearty good cheer of her large extended family. She emerged from her childhood well-loved, and with a gentle and sympathetic heart. In 1941, her family moved to Elmira. A quiet and reserved student, she graduated from Southside High School in 1947, where she had matured into a reliable, hard-working woman, with a solid grounding in common sense—all balanced with an unquenchable sense of fun. After high school, she worked her way into a position of responsibility as head cashier at Woolworth’s, when a man she met on a blind date was dazzled by her red hair and infectious laugher. During her year-long engagement to Ralph Alexander Boesen, the couple built their one-of-a-kind Pine City home together, stone by stone. They were wed on July 11, 1953—a happy marriage that lasted the rest of their lives. Jointly, Alex and Eleanor owned and operated Boesen’s Greenhouses in Pine City, until their retirement in the 1990s. They worked together, travelled together, and enjoyed family, friends, and pets together. But their true calling was in parenting their own children and grandchildren, and any others who happened into their orbit. In the presence of strangers and acquaintances, Eleanor appeared shy, but she revealed her passionate side to those privileged to know her well. She took ribbing about her nearly legendary lack of patience and her occasionally fiery temper with her typical good grace and self-deprecating humor. When her son-in-law presented her with a “backseat driver’s license,” she not only accepted it with aplomb, but carried it proudly. She laughed with gusto, sang happy songs, and relished ice cream (even in winter). She made everyday things fun. When others were scurrying to get out of the rain, Eleanor would say, “Let’s go for a walk.” Eleanor is survived by her daughter, Lisa Boesen (Chuck Caldarale) of Minneapolis; daughter-in-law, Elizabeth Ebinger Boesen of Penn Yan; and granddaughter, Karin Boesen-Earle (Josh Earle) of Syracuse. She was preceded in death by her parents; sister, Charlotte June (Barr) Krebs; beloved son, Bret Boesen, and the love of her life, husband, Alex. There will be a gathering for remembrance and stories on Saturday, March 30, 2019 from 3:00 to 5:00 pm at the Olthof Funeral Home, 1050 Pennsylvania Ave., Elmira/Southport, NY. In lieu of flowers, memorial donations can be directed to the Chemung County Humane Society and SPCA, or the Alzheimer's Association. Envelopes will be available at the service of remembrance.

The family of Eleanor R. Boesen created this Life Tributes page to make it easy to share your memories.

Send flowers to the Boesen family.