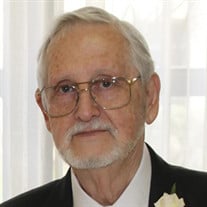 ELMIRA - Elijah Graham Pillow, 89, of Elmira, NY, passed away on Friday, November 13, 2020 at the Arnot Ogden Medical Center. Graham was born on August 6, 1931 in Farmville, VA, the son of the late Oliver and Isabel (Fleshman) Pillow. Graham’s early life was centered in Virginia. As a young man he earned a Bachelor of Arts from William and Mary College in Williamsburg, VA while serving as a Army ROTC cadet. In the summer preceding their senior year in college, Graham married his first wife Jane Carney. After completing his studies at William and Mary, he served the U.S. Army during the Korean War as a second lieutenant. After his four years in the Army, Graham taught English at Newport News High School and Physics and Computer Science at Christopher Newport College ( a branch of William and Mary) in Newport News, VA. While teaching, he earned his Masters of Science from William and Mary College and later did extensive post graduate work at UNC Chapel Hill. During this time he served in the U.S. Army Reserves for 10 years and was promoted to the Rank of Captain. In the early 70’s, Graham worked with Riverside Hospital in Newport News, VA to develop one of the first computer programs for medical diagnostics. It took years to compile, write and test a program that could analyze data and direct it toward possible diagnosis and treatments. The variables were many and computer power was still limited. He was ahead of his time in the computer field. While at Christopher Newport College, he and a colleague created one of the first computer science degree programs in Virginia. These accomplishments led Graham to become the Director of Medical Computing at the University of Virginia at Charlottesville. He went on to become the Assistant Vice President of Information Systems at the University of Oregon in Portland. He then was the Director of Systems and Data Processing at Ithaca College, Ithaca, NY, from where he retired. After retirement, Graham's love of music led him to play the keyboard in Florida as part of a dance band that performed at various yacht clubs and clubhouses. He also was an avid video game player, loved dancing and going on cruises. He and his first wife Jane also raised purebred Burmese show cats. Curious by nature, he was a voracious reader, loved to travel and was a lifelong learner. He was a loving husband, father, grandfather and great-grandfather. Graham is survived by his loving wife, Betty (Christopher) VanDelinder Pillow; sons, David (Terri) Pillow of Arlington, TX and Steven Pillow of Newport News, VA; step-daughter, Debb VanDelinder of Elmira, NY; step-son, Scott (Megan) VanDelinder of Albany, OR; grandchildren, Jason, Joshua, and Jeremy of Texas, Walker of California, Stewart of Texas, Wilson, Davis and Isabelle of Virginia; step-grandchildren, John and William VanDelinder, Jamie VanDelinder-Pierce of New York State, Ethan and Skyler VanDelinder of Oregon; great-grandchildren, Benjamin and Leah Pillow of California; step great-grandchildren, Julian VanDelinder, Dillon and Jacob VanDelinder-Pierce, Ruby Newton VanDelinder, all of New York State; and brother Frank (Donna) Pillow of Mishawaka, IN. Graham was predeceased by his parents and his wife of 56 years, Jane (Carney) Pillow. Due to the COVID pandemic, memorial services will be held at a later date for family and friends. Burial will take place in Bushnell National Cemetery in Bushnell, FL beside his first wife, Jane. The family asks that memorials be made to Christopher Newport College, 1 University Pl., Newport News, VA 23606 in Graham's name. Graham's tribute wall may be signed at www.olthof.com

The family of Elijah Graham Pillow created this Life Tributes page to make it easy to share your memories.

Send flowers to the Pillow family.