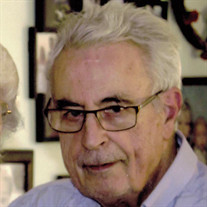 BIG FLATS – Herbert E. Yost, 73, of Big Flats went to be with his Lord on Saturday, August 1, 2020. Born in Johnson City on April 10, 1947, he was the son of the late Herbert E. and Gladys E. (Snapp) Yost. He proudly served his country in the US Navy and the Army Reserves. He went on to work for the New York State Department of Corrections retiring as a Sergeant. At the time he retired, he headed up the honor guard at the Elmira Correction Facility. Herbert had a 4-H Club, the Holly Park Renegades, which consisted of 30 kids who still call him dad. At the time of his death, he was the commander of the American Legion Clarence Oliver Post 154 in Elmira Heights, NY. In addition to his parents, Herbert was predeceased by his daughter, Angela Ann Yost. He is survived by his loving wife of 53 years, Elizabeth (Viele) Yost; his sons, Allen E. (Denise Evans) Yost, Lewis N. (Ashley Rae Cole) Yost; six grandchildren; a step granddaughter; and 6 great-grandchildren. Friends may call from 4-7 pm on Thursday, August 6, 2020 at Olthof Funeral Home, 1050 Pennsylvania Avenue, Elmira, NY. A funeral service will be held at 11 am on Friday, August 7, 2020 at the funeral home with the Rev. Daniel Barner and Herbert’s grandson, officiating. Burial will follow in Woodlawn Cemetery on Walnut Street in Elmira. In compliance with NYS regulations, attendance will be regulated to 50 people at any given time, face masks are required and social distancing will be practiced. Herbert’s tribute wall can be signed in obituaries at www.olthof.com

The family of Herbert E. Yost created this Life Tributes page to make it easy to share your memories.

Send flowers to the Yost family.