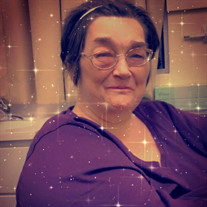 ELMIRA – Janet M. Stansfield, 60, of Elmira, passed away on Tuesday, July 20, 2021. Born on June 7, 1961, she was the daughter of the late Richard Stansfield and James and Patricia (Young) Swasta. She was a 1980 graduate of Southside High School. For many years, Janet was a baker at Tops Friendly Markets in Elmira. She enjoyed watching NASCAR and watching wrestling. More than anything, Janet cherished the time that she shared with her children and grandchildren. In addition to her parents, she was also predeceased by her maternal grandparents, Floyd and Kathryn Young; and her aunt, Connie Baxter. She is survived by her children, Jessica Stansfield (Justin Riker) of Elmira Heights, Debbie (Joe) Storch of Horseheads, Sarah (Nick) Moser of Elmira, Kevin (Dawn) Livermore of Elmira; her grandchildren, Raelynn Stansfield, Peyton Stansfield, Nicholas, Abigail and Kathryn Storch; her sister, Julie Hicks of Elmira; her niece, Ashley Hicks (Gary Holmes) of Elmira; her nephews, Tommy Hicks (Marissa Collson) of Elmira, Jimmy Hicks (Rebekah West) of Elmira; her cousins, Chrissy (Bob) Baxter Keyes of Michigan, David Baxter (Teri Waite) of Fort Myers, FL, Lynzi and Kaydi Baxter of Fort Myers, FL, Celine Keyes of Michigan, Robert Keyes of Salt Lake City, UT, Jessica Keyes of Michigan, Danny Ripley of Elmira, Jeffrey Ripley of Elmira, Lorrie Baxter (Lorin Andrien) Canton, PA; her uncle, Jerry Baxter, Canton, PA; as well as many close friends. Family and friends are welcome to attend a celebration of Janet's life from 2-5 pm on Friday, August 20, 2021 at the American Legion Post 154, 236 Scottwood Ave, Elmira, NY 14903. Contributions in Janet’s memory may be made to the kidney research organization of your choice. Janet’s family would like to thank the staff on the third floor of the Chemung County Nursing Center for the care she received. Online condolences may be made by visiting www.olthof.com.

The family of Janet M. Stansfield created this Life Tributes page to make it easy to share your memories.

Send flowers to the Stansfield family.