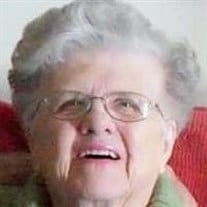 Jeanne L. (Watts) Cheeseman Age 89, was born June 6, 1930 in Elmira, NY the daughter of the late Kenneth and Genevieve (Conklin) Watts, passed away on Tuesday, November 12, 2019 at Elcor Health Services. Jeanne was preceded in death by her first... View Obituary & Service Information

The family of Jeanne L. (Watts) Cheeseman created this Life Tributes page to make it easy to share your memories.

Send flowers to the Cheeseman family.