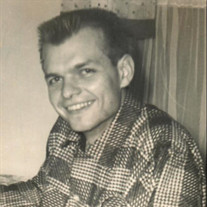 Joseph Michael Andrysick, 83, passed away at home Saturday, April 6, 2019, at 6:30 p.m. from complications of colon cancer and Lyme disease. Joseph was born in Nanticoke, PA, August 12, 1935, to parents, Michael Andrysick, (1887-1969) and Katherine (Shepela) Andrysick (1892-1944). Joseph was the son of a coal miner. He grew up in a company-owned house, sleeping in a bed with all of his brothers. From these humble beginnings he went on to work for NASA. In the 1950s he was a naval reservist. Joseph graduated from Corning North Side High School in 1953. He graduated with a B. S. in Chemistry from Bloomsburg State Teachers College 1958. He received his Masters from Elmira College in 1966. At Thomas A. Edison High School in Elmira Heights, NY, he was a Chemistry teacher from 1960 - 1995. He invented Chem Bowl, a chemistry competition among high school students, leading his students to state championships. On the first day of every school year, he would set off a surprise explosion in the back of the room. He loved his students and his students loved him. When he retired, Elmira Heights honored him with Joseph Andrysick week. In the winter of 1962, while working as a teacher during the day, Joseph worked late into painfully cold nights building his house using the foundation of an old chicken coop. He could fix anything and was perpetually curious. He would say, “Don’t let schooling get in the way of your education.” Joseph won seven National Science Foundation scholarships working on projects for NASA researching the effect of rocket fuel on the environment at Syracuse University, Oneonta University, Potsdam University, Elmira College, Cornell University and Boyce Thompson Institute of plant research in New York City. Recently, he was outspoken protester against hydraulic fracturing in the Finger Lakes region. Joseph taught himself to fly an ultralight by taxiing up and down the runway at the Blue Swan Airport, Sayre, PA. He met many friends there who he spoke of fondly. His sons have a very happy memory of a 180-mile canoe trip down the Susquehanna River from his home in Elmira to the place of his birth. Joseph was an avid skier, fisherman and hunter. His favorite past time was taking his boat on Seneca Lake by the salt works. Joseph was married to Shirley I. Kocher-Keller, Benton, PA, from 1958 - 1970. He was married to June Ford, Elmira, NY from 1983 - 1992. He is survived by his mate of 14 years (and fellow pilot), Nancy Sherman. Sisters: Verna Tommor, Nanticoke PA; Regina Herlich, Moorestown, NJ. Son, John Andrysick and his wife, Dr. Mary Ann Knovich, Charlotte, N.C.; grandchildren: Lauren, Matthew, Christina and Rachel; son, Jeff Andrysick, doctor of naturopathic medicine (ND), and his wife, Jodi Andrysick, (ND), owners of HAFunland, Keuka Lake area, N.Y., daughter, Lorelei Andrysick, NYC and many beloved nieces and nephews. He was predeceased by brothers: Chester Andrysick, Corning, NY; Ed Andrysick, Lawrenceville, PA; Frank Andrysick, Painted Post, NY; sister: Dorothy Swanson, Sugar Notch, PA. Joseph was touched by the celebration of his 50th anniversary of teaching at Elmira Heights by his students.......and the amazing outpouring of support during his illness from previous students, faculty, neighbors, family and friends. We will miss his great sense of humor and love of life. Family and friends are invited to gather at the Olthof Funeral Home 1050 Pennsylvania Ave. Elmira/Southport, NY on Thursday, April 11, 2019 from 4:00 to 5:00 pm. Funeral Services honoring Joe's life will follow the visitation at 5:00 pm. Lay Pastor John P. Knapp will officiate. Interment will take place in the St. Mary's Cemetery Corning NY on Friday, April 12th at 10:00 am. You can send flowers or make a donation to the Food Bank of the Southern Tier 388 Upper Oakwood Avenue Elmira, NY 14903. Joseph's tribute wall can be signed in obituaries at www.olthof.com.

The family of Joseph M. Andrysick created this Life Tributes page to make it easy to share your memories.

Send flowers to the Andrysick family.