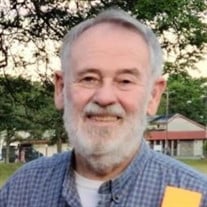 Lauren J. “Larry” Campbell Elmira Heights – Age 73, passed unexpectedly in a tragic house fire on September 26, 2020, with his loyal dog, Lizzie, by his side. Larry was born on June 5, 1947, in Elmira, New York, to Orwin and Grace (Wright) Campbell. He was predeceased by his parents, his mother-in-law Celia Kokoszka, and his grandson Jacob Campbell. Larry is survived by his loving wife of nearly twenty-four years, Catherine Campbell; his son Andrew (Holly) Campbell; step-daughter Brenda Mosolf; his grandchildren Anthony Mosolf, William Edwards, Anastasia Edwards, Benjamin Campbell, and Alexander Campbell; his brothers Russell (Stephanie) Campbell and Richard (Pamela) Campbell; and his nephews Michael Campbell and Theodore Campbell. He also leaves behind countless friends who made up an enormous and loving extended family. Larry was not only a loving husband, father, grandfather, and friend, but also a very active member of his community. His career spanned five decades, with his final position as the office manager of Sayles and Evans. He spent many years serving his community with Kiwanis, and was active with North Presbyterian Church. He was a founding member of the Chemung Valley Street Rods, an organization which was very near to his heart. Every year Larry took a key role in the car club’s charity auction, which raised thousands of dollars annually for local organizations including the Arctic League, Seneca Santa, the Salvation Army, the Red Cross, and numerous others. Those who knew Larry through CVSR would testify to Larry’s incredibly giving nature – a walk around any local car show would evidence countless projects that Larry contributed to in one way or another, whether it was helping to chop a roofline, pull an engine, apply paint, or any number of other contributions. Larry was an incredibly giving person – he always took time to help those in need, whether it be by donating funds or by donating his time, both of which he gave freely. If you knew Larry you knew that he was really just a softie when it came to animals. The many feline and canine companions he cared for over the years knew nothing but love and affection (some may have called them spoiled, Larry just called them well-fed). Larry also believed strongly in the power and importance of organ donation, a cause very dear to his heart. The family requests that, in lieu of flowers, you honor Larry’s memory by making a donation in his name to one of the following charities: the SPCA, the Donor Family Network, the Arctic League, or the North Presbyterian Food Pantry. You may also honor Larry by registering to be an organ and tissue donor. A private funeral service will be held at the convenience of the family. A celebration of Larry’s life will be held at a later date. Larry’s tribute wall can be signed in obituaries at www.olthof.com.

The family of Lauren J. Campbell created this Life Tributes page to make it easy to share your memories.

Send flowers to the Campbell family.