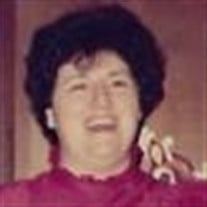 Elmira - Linda Ruth Van Riper Age 72, of Elmira, passed away on Wednesday, November 16, 2021. Born on September 5, 1949, in Elmira, NY, she was the daughter of the late Maurice L. and Frances (Grace) Van Riper. After graduating from Southside High School, she attended Queen of the Apostles/Harriman College. She then came home to Elmira to work for the A&P Plant in Big Flats while completing her degree at Elmira College. After receiving her degree, she accepted a teaching position in Utah and would return several years later to work for the Elmira City School District as a substitute teacher. Later in her career, she went to work in the paint department at Sears in the Arnot Mall. Linda spent much of her past time working on her family's genealogy. She would do extensive research, traveling around to cemeteries and making family tree charts. She also loved collecting owl figures. More than anything, she cherished the time that she shared with her friends and family. In addition to her parents, she was predeceased by her sisters, Mary Van Riper and Sherril Van Riper. Survivors include her brother, Rollin (Donna) Van Riper of TN; her sister, Karen (John) Kozinsky of Watkins Glen; her nieces and nephews, Kristina (Robert) Van Riper-White, Andrea Van Riper, Steven Kozinsky, Timothy (Lindsay) Kozinsky; dear friend, Diane Taylor. Friends are invited to attend a Memorial Service on Monday, November 22, 2021 at 11:00 a.m., at the Church of Latter Day Saints, 1060 W. Broad St., Horseheads, NY. Burial will be private in Maple Grove Cemetery in Horseheads, NY. Contributions in Linda's memory may be made to the American Cancer Society, P.O. Box 10727, Rochester, NY 14610.

Elmira - Linda Ruth Van Riper Age 72, of Elmira, passed away on Wednesday, November 16, 2021. Born on September 5, 1949, in Elmira, NY, she was the daughter of the late Maurice L. and Frances (Grace) Van Riper. After graduating from Southside... View Obituary & Service Information

The family of Linda Ruth Van Riper created this Life Tributes page to make it easy to share your memories.