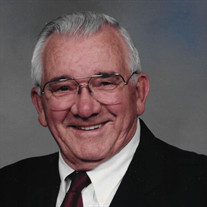 Age 98, went peacefully to be with his Lord, Friday, February 7, 2020, at his home in Gillett, PA. Lynn was born in Gillett on January 12, 1922, a son of the late Cola and Mae (Wright) Maynard. Surviving Lynn is his son, Gary Maynard, of Gillett, PA; granddaughter, Shawna Stoner; great-grandchildren, Dylan Stoner and Sean Riley Stoner; dear friends, Collette and Marvin Roberts and Colleen Kane; and several nieces and nephews. He is predeceased by his wife of 65 years, Ruth (Gordon) Maynard; daughter, Linda Haxton; brothers Melvin, Rexford, and Lester Maynard; sister, Pauline Woods; and special friend, Phyllis Ward. Lynn was a graduate of Troy High School. He went to work for Bendix from 1939 until he went into the Army, and served from 1942 until 1945, Company F, Second Battalion, 85th Infantry. Most of his time was spent in Italy where he was a courier. He was awarded the Bronze Star for heroic action in Italy, after he and another soldier went behind enemy lines to deliver a crucial message to another battalion. After the war, he returned to Gillett, PA and married Ruth Gordon on April 12, 1947. Lynn went back to work for Bendix, until he retired in 1975 after 32 years. He then had a lawn and garden business from 1969 until 1974, sold Fireview wood stoves from 1977 to 1980, and also drove school bus for twenty years. He was on the Troy School Board for 14 years. He is a charter member of the South Creek Lions Club, a member of the Troy Masonic Lodge, and a member of the Gillett Baptist Church. Grateful recognition is given to caregivers, Ginger Kostecky, Hazel Broock, Vicki Bennett, Marj Pellor, Towanda Hospice, and the VA Health Care Network. Family and friends are invited to attend calling hours at the Gillett Baptist Church, 33241 PA-14, Gillett, PA 16925 on Tuesday, February 11, 2020 from 3:00 pm to 6:00 pm. Funeral Services will be held at the church on Wednesday, February 12th at 11:00 am with Rev. Donald Maynard and Pastor Micky Cavanaugh celebrating Lynn’s life. The interment will follow in the Gillett Cemetery where the Tioga County Honor Guard will accord Mr. Maynard with Military Honors and the clergy will conduct the committal prayers. In lieu of flowers, donations can be sent to Gillett Baptist Church. Lynn’s tribute wall can be signed in obituaries at www.olthof.com

Age 98, went peacefully to be with his Lord, Friday, February 7, 2020, at his home in Gillett, PA. Lynn was born in Gillett on January 12, 1922, a son of the late Cola and Mae (Wright) Maynard. Surviving Lynn is his son, Gary Maynard, of Gillett,... View Obituary & Service Information

The family of Lynn Dewey Maynard created this Life Tributes page to make it easy to share your memories.

Age 98, went peacefully to be with his Lord, Friday, February...

Send flowers to the Maynard family.