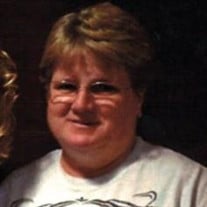 Mrs. Monalisa M. Pratt, age 62 of Glenwood, passed away on Friday, April 1, 2022 at Memorial Health Meadows Hospital in Vidalia. She was born on September 29, 1959 to the late Robert Francis Cooper, Sr. and Genevieve Ruth Baker Cooper. She had been a medical assistant for most of her life until her retirement and then went to work at J & C Speciality Foods. In addition to her parents, she was preceded in death by her husband, Paul Pratt, Sr.; her brother, Robert Francis Cooper, Jr.; and her sister, Linda Hurbert. Those left to cherish her memory include her two sons, Paul Pratt, II (Naomi) and Jesse Pratt; her daughter, Christina Day (Kenneth); and six grandchildren, Robert, Felicity, Courtney, Jesse, Kaya, and Devon; and several nieces and nephews. Family and friends are invited to attend a graveside service on Friday, April 8, 2022 at 1:00 PM at Forest Lawn Memorial Park, 563 Jerusalem Hill Road, Elmira, NY.

The family of Monalisa Pratt created this Life Tributes page to make it easy to share your memories.

Send flowers to the Pratt family.