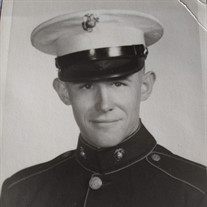 CATON – Morris Arthur (Mort, Poppy) Gridley, Sr. passed away December 6, 2021, at Elderwood in Hornell at the age of 86 after a 10-year battle with Alzheimer’s. He was born on November 22, 1935, the son of Dortha Woodhouse Gridley and Ernest Gridley and was raised in Caton. Morris attended Northside High School and enlisted in the United States National Guard. Shortly after, he became a United States Marine and served for three years during the Korean conflict. Morris married Evelyn, his loving wife of 67 years, on February 12, 1954. Together they raised four boys in the town of Caton. Among the many things that he did, he worked for the United States Postal Service for 30 years and retired at the age of 55. After retiring, he spent his time driving school bus for Birnie Transportation, Horseheads School District, and Corning School District. He was the first President and CEO of the Veterans Administration Credit Union in Bath, NY. Morris was the President and Groundskeeper of Elmwood Cemetery in Caton for 30 years. He was a member of the Steuben and Chemung County Beekeeper’s Association, Cornell Cooperative Extension, and a life member of the Caton Volunteer Fire Department for over 60 years. Among all else, he served on the Caton Town Board as a councilman, town supervisor, and planning board member for many years. In October of 2017, Morris was admitted to Elderwood in Hornell for Alzheimer’s. He loved his town of Caton and made many friends in his life there. During retirement, he would often drive the roads of his small town like it was his last day seeing it. Morris was an avid gardener, hunter, trapper, and fisherman. He was known by many people as Mort, Morty, Poppy, and Kubota Pete. Morris’ grandchildren will always remember him from his whisker burns and his knee squeezing. In addition to his parents, he was predeceased by his brother Henry Gridley, his daughter-in-law Diane Gridley, and his grandson Eric Richard Gridley. Surviving in addition to his wife, Evelyn Wellington Gridley, are his sister Ernestine Barnes of Savannah; sons, Morris A. Gridley, Jr. (Patricia) of Corning, Kevin J. Gridley (Jacquelyn) of Caton, Mahlon E. Gridley of Caton, Maynard A. Gridley (Lisa) of Caton; grandchildren Aubrie Gridley Entwood (Jim) of Ithaca, Joshua Gridley (Lisa) of Coopersburg, PA, Kevin H. Gridley (Jennifer) of Greensburg, PA, Kristin Gridley Williamson (Mark) of Canandaigua, Jessica Gridley O’Brien (Trevor) of Baltimore, MD, Clarissa Gridley of Corning, Jonas Gridley of Horseheads, Emily Gridley of Caton, and Megan Gridley of Caton; along with 10 great grandchildren and many nieces and nephews. A memorial service will be held at a later date.

The family of Morris Arthur Gridley Sr. created this Life Tributes page to make it easy to share your memories.

Send flowers to the Gridley family.