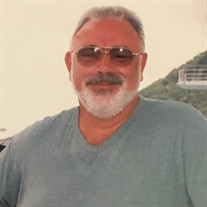 PINE CITY – Naif Gary Batroney, 68, of Pine City, passed away on Friday, August 21, 2020 at Arnot Ogden Medical Center. Born on July 11, 1952 in Elmira, NY, he was the son of Norma G. (Durfee) Batroney and the late William M. Batroney. After graduating from Elmira Free Academy, Gary joined the United States Air Force in 1972 and was honorably discharged in 1974. He went on to work in maintenance as a plumber for Arnot Ogden Medical Center for 20 years. Gary was a friend to all of those who knew him. He brought smiles to the faces of everyone in his presence and was known to often joke to lighten any mood. If someone was in need, no request was too great. Gary would drop everything to help others in need. Over the years, Gary enjoyed playing and coaching softball, hunting, camping, racing minicars in Chemung, bowling and golf. Gary enjoyed spending time with his friends and family. More than anything, he cherished the time he shared with his mother, sister, brother, children and grandchildren. He will truly be missed by everyone who knew him. In addition to his mother, he is survived by his children, Naif “Nick” Batroney, Jr., Sharon (Jack) Martin, Missie (Chuck) Grover, David (Pam) Jones; his grandchildren, William & Mark Batroney, Saige (Coby) Martin, Jaxon & Evan Martin, Chuck, Ryan & Julia Grover; his sister, Connie (Dale) Campbell; his brother William (Mary) Batroney; as well as several great grandchildren, aunts, nieces, nephews & cousins. Friends may call from 4 to 7 pm on Thursday, September 3, 2020 at Olthof Funeral Home, 1050 Pennsylvania Avenue in Elmira. Burial in Woodlawn National Cemetery in Elmira, NY will be private. In lieu of flowers, please send a card with a memory you shared with Gary. A keepsake box will be available at the visitation. In compliance with NYS regulations, face coverings should be worn and social distancing will be practiced.

The family of Naif "Gary" Batroney created this Life Tributes page to make it easy to share your memories.

Send flowers to the Batroney family.