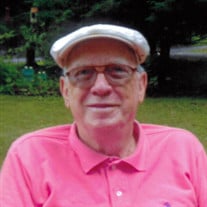 ELMIRA – Norman C. Lungstrom, 89, of Elmira, passed away on Tuesday, February 16, 2021. Born on October 6, 1931 in Enterprise, KS, he was the son of the late Harold and Elize (Johnson) Lungstrom. He served for 4 years in the Navy during the Korean War. Norman met his first wife, Patricia while both were serving in the Navy. They moved to Elmira and had four children together. Norman worked for Millbrook in Elmira until it closed. Then worked for Red Jacket Motel and the Tops in Waverly. Norman Volunteered at the Clemens Center for over 20 years in the back stage security while documenting the shows with pictures and programs in several keepsake albums. The albums were donated to the Clemens Center by his family. In addition to his parents, Norman was predeceased by his wives, Patricia in 2000 and Vivian in 2015; his daughters, Pamela Hubinger in 2000 and Connie McGinnis in 2020; and his daughter-in-law, Anne in 2019. He is survived by his son, Timothy Lungstrom of Elmira; his daughter, Linda (Dale) Conrad of Elmira; his son-in-law, Mark Hubinger and Mark McGinnis; his grandchildren, Robert (Emily) Conrad, Becci (Sean) Clark, Tony (Amanda) McGinnis, Scott (Shannon) McGinnis; and his great-grandchildren, Noah, Adam, Hannah and Nathan Conrad, Chelsea (Greg) Fischer, Bret Clark, Jaxson and Kennedy McGinnis. Per Norman’s wishes there will be no calling hours. Interment will take place at Woodlawn National Cemetery in Elmira at the convenience of his family. Linda would like to thank Dr. Keith Parker and the staff at St. Joseph Skilled Nursing Facility both A-3 and A-5 for the care they gave Norman for the past year. Contributions in Norman’s memory may be made to St. Joseph Hospital – Skilled Nursing, C/O Arnot Health Foundations, 571 East Market Street Suite 102, Elmira, NY 14901 or Clemens Center, 207 Clemens Center Pkwy, Elmira, NY 14901. To leave online condolences, please visit www.olthof.com.

The family of Norman C. Lungstrom created this Life Tributes page to make it easy to share your memories.

Send flowers to the Lungstrom family.