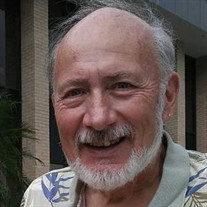 Born November 29, 1951 in Elmira, NY the son of the late James Peter and Margaret (Gowdy) Callas, and passed away on Monday, January 20, 2020 in St. Cloud, FL. He is survived by his sisters: Penelope (David) Allington of Pine City, NY; Catharine (Patrick Filliben) Callas of Southport, NY; Georgia (Thomas) Rennie of Pine City, NY; nieces and nephews: Andrea (Mark) Badurak, Jerid (Kelly) Allington, Carolyn (Kevin Falkenberg) Rennie, Colleen (Travis Shockley) Rennie, great nieces: Ava, Kaitlin, and Luna; along with many cousins and numerous friends. Pete was a lifelong Boy Scout obtaining his Eagle Scout, and spent countless hours volunteering his time and talents with the Five Rivers Council at Camps Gordon, Iroquois, Seneca and Brule. Additionally, Pete was a member of the Order of the Arrow, the National Honor Society of the Boy Scouts of America. The Order of the Arrow is composed of Scouts and Scouters who best exemplify the Scout Oath and Law in their daily lives, as elected by their peers. He loved participating and performing in the authentic ceremonies of the OA based upon the American Indian culture. Pete was a proud member of the Elmira Fire Department before he moved to Florida to work with his godfather, Jim Strates, at the James E. Strates Show. Following his time on the road, he became an independent photographer contracting with NASA, Hooters, the Houston Astros, and several national publications. Being a thrill seeker, he would often find himself strapped to speeding helicopters, boats and planes to get the perfect shot, but always making sure to not tell his mother until after he did it. Pete was an avid fisherman and specialized in creating custom rods, fishing his beloved Finger Lakes and the many waters in Florida. He expressed his artistic abilities through many mediums. He attended Alfred State Tech for auto body repair and was an accomplished paint and detail specialist, customizing vehicles and motorcycles from his uncle's VW Bug to Shaquille O'Neal's personal Harley. Anyone who knew Pete, knew that he was a human oxymoron. He found great joy and great sadness in life and he brought great joy to those who were lucky enough to call him son, brother, uncle and friend. There will be no formal calling hours or services at this time. Peter will be laid to rest in Woodlawn Cemetery beside his beloved brother, Stephen, in the spring. Donations in Pete's memory can be made to the Boy Scouts of America, Five Rivers Council, Scout Shop, 3300 Chambers Rd, Ste 5190, Horseheads, NY 14845-5190 or online at Fiveriversbsa.org Pete’s tribute wall can be signed in obituaries at www.olthof.com

Born November 29, 1951 in Elmira, NY the son of the late James Peter and Margaret (Gowdy) Callas, and passed away on Monday, January 20, 2020 in St. Cloud, FL. He is survived by his sisters: Penelope (David) Allington of Pine City, NY; Catharine... View Obituary & Service Information

The family of Peter "Pete" James Callas created this Life Tributes page to make it easy to share your memories.

Send flowers to the Callas family.