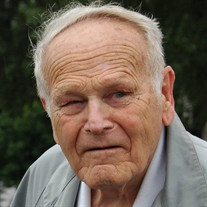 Ralph Alexander (Alex) Boesen, age 91, passed away on November 29, 2018, at Arnot Ogden Medical Center in Elmira, NY. Ralph was born March 8, 1927, as the fourth child of Niels Frederik Hansen Boesen and Ingeborg Johanne (Hoffer) Boesen. He learned the joy of hard work (with some difficulty) on his family's small, Pine City farm and nursery. The art of mischief-making came much easier to him, and he honed this craft with his pals at the District Six one-room school. At age 17, Ralph indulged his taste for adventure by serving in the Merchant Marine in the perilous Atlantic during the last year of WW II. He also served in the Army during the Allied occupation of Germany; his duties ranged from detecting landmines to clerking in the Office of the Adjutant General, helping to process soldiers back into civilian life. After the war, Ralph attended Alfred State College on the GI Bill, earning a degree in botany. Ralph met his true companion on a blind date, and proposed a week later. After a year-long engagement, Ralph married Eleanor Ray Barr on July 11, 1953, and the two have been inseparable through joy and sorrow. A dedicated parent, Ralph's gentle demeanor, love of children, and impish sense of fun attracted an extended circle of children to his side. Ralph has shepherded generations of neighborhood children through life's victories and heartbreaks. Together, Ralph and Eleanor ran Boesen's Greenhouses in Pine City until their retirement in the mid-90s. Ralph was also an artist, and his paintings, drawings, and carvings grace many local homes. His own comfortable home was filled with art, books, plants, pet hair, and laughter. Ralph’s final years were spent at the Chemung County Nursing Facility, still at Eleanor’s side. The family sends heartfelt thanks to the many staff members at CCNF who showed such loving care. Ralph is survived by his wife, Eleanor; daughter Lisa Boesen (Chuck Caldarale); daughter-in-law Elizabeth Ebinger Boesen; and grand-daughter Karin Boesen-Earle (Josh Earle). He is preceded in death by his parents, siblings, and beloved son, Bret Boesen. Story-teller, philosopher, traveler, historian, life-long learner, curmudgeon, and scamp, Ralph enjoyed nothing more than sitting with a cup of coffee, a plate of cookies, and a few friends for an evening of good conversation. In that spirit, the family invites friends to a casual gathering for stories and remembrance at the Olthof Funeral Home, 1050 Pennsylvania Ave, Elmira, on Saturday, December 8, from 3 to 5 PM. In lieu of flowers, memorial donations may be made to the Chemung County Animal Humane Society and SPCA or to the Alzheimer’s Association. Envelopes will be available at the Funeral Home.

The family of Ralph Alexander Boesen created this Life Tributes page to make it easy to share your memories.

Send flowers to the Boesen family.