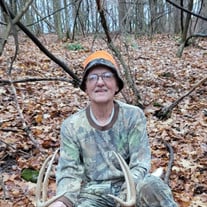 WAYLAND – Richard T. McAtee, Sr., 65, of Wayland, passed away on Sunday, January 2, 2022. Born on November 2, 1956 in Elmira, NY, he was the son of Alberta (Durfee) McAtee and the late Elmer R. McAtee. He was a 1974 graduate of Horseheads High School. For more than 45 years, he was a professional auto body technician working for many shops around the region. He loved hunting and fishing with his sons. More than anything, he cherished the time that he shared with his children and grandchildren. In addition to his father Elmer R. McAtee, he was also predeceased by his brother-in-law, George E. Mitstifer. He is survived by his mother, Alberta (Durfee) McAtee; his sons, Richard T. (Kimberly) McAtee Jr. of Corning, NY, Ryan McAtee (Nacole Burchard) of, Dansville, NY; his grandchildren, Talon Elliott, Peyton McAtee, Molly McAtee; Kailey McAtee, Lilian McAtee, Tanner McAtee, Lyla Brown; his siblings, Deborah Mitstifer, Judd (Kristie) McAtee, Susan (Tom) Schnautz, Jackie McAtee; as well as several nieces, nephews and cousins. A celebration of his life will be announced at a later date.

The family of Richard T. McAtee Sr. created this Life Tributes page to make it easy to share your memories.

Send flowers to the McAtee family.