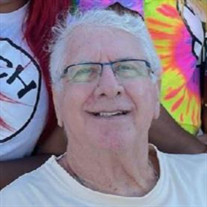 Roger Alden Wich He was born on November 28,1938 in Elmira, NY and passed away peacefully in his sleep on January 11, 2022 at the Arnot Ogden Medical Center. Roger attended Edison High School and upon completion, entered the United States Navy. Roger made a career working as a delivery man and was successful mostly due to his gift of gab. He was employed by DairyLea Milk for 26 years. Early on, he delivered milk to homes then later in his career he delivered locally to schools and grocery stores. Before retirement, he drove milk tanker between Elmira and NYC. After leaving DairyLea, Roger was employed by 7-Up Distributors for a number of years. He and his wife then purchased a Bachman potato chip route. Roger delivered chips for at least 5 years to local establishments. To the delight of the neighborhood children, Roger and Nancy always handed out Bachman snacks for Halloween. Roger enjoyed outdoor activities year round with family and friends. In the winter, he loved snowmobiling and wintering in Florida as he got older. During the warmer months, Roger could be found boating on one of the Finger Lakes. He was an avid collector of many things and enjoyed showing off his collectibles to all that visited. Roger was predeceased by his mother, Margaret Wilson and father, Frederick Wich; his sister, Betty Wich, and four brothers, Robert (Prudy) Wich; Frederick (Delores) Wich; Charles (Alma) Wich; and Jack (Maxine) Wich. A childhood classmate and lifelong family friend, Patricia Crum, joined the Lord in 1997. Roger leaves behind his loving wife, Nancy Wich and their four children, Randy (Gayla) Ball; Ronald (Carina) Ball; Scott (Jacquie) Wich; and Elaine (Phillip) Collum. He had eight grandchildren; Matthew Ball, Josh Ball, Alyssa Ball, Amy Ball, Michael Ball, Erin Wagner, David (Stephanie ) Wich and Jenna Rose Rosbach, three great-grandchildren and several nieces and nephews. Roger is also survived by his lifelong friend, E. David Crum, a brother-in-law and three sisters-in-law. Olthof Funeral Home will be handling the arrangements. Calling hours are Sunday, January 16, 2022, 11 AM - 1 PM. In lieu of flowers, donations in Roger's memory can be made to Chemung County Humane Society & SPCA, 2435 NY352, Elmira, NY 14903.

Roger Alden Wich He was born on November 28,1938 in Elmira, NY and passed away peacefully in his sleep on January 11, 2022 at the Arnot Ogden Medical Center. Roger attended Edison High School and upon completion, entered the United States Navy.... View Obituary & Service Information

The family of Roger Alden Wich created this Life Tributes page to make it easy to share your memories.

Send flowers to the Wich family.