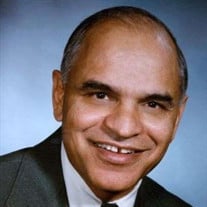 Dr. Suresh T. Gulati (1936-2020) Suresh Thakordas Gulati of Horseheads NY passed away peacefully at home, surrounded by his family, on Wednesday, May 27, 2020. He was 83 years old. A memorial service will be scheduled sometime in the future. Suresh was born November 13, 1936 in the state of Punjab in North India. He was the fourth of six children. When India was partitioned in 1947, Suresh moved to Bombay to live with his aunt and uncle and their six children. He completed high school in 1952 and entered the University of Bombay, graduating in 1957 with a BS in Mechanical Engineering. Suresh applied to graduate schools in the US and was granted admission to the Illinois Institute of Technology (IIT). Lacking the necessary funds, he appealed to several family members for loans. He came to the US by an Italian ship to Genoa, several trains through Europe, and a British ship to New York – a journey of 21 days. From New York, he took a Greyhound bus to Chicago, arriving with only $400 to his name – just enough to pay for his first semester’s tuition. Suresh put himself through graduate school by working as a grader for his professor, as a tester of radio and TV tubes, as a busboy, and as a dishwasher. He graduated from IIT in 1959 with an MS in Mechanical Engineering. In August 1960, he met a lovely nurse by the name of Terry Davids. Terry was from South India and was working at nearby Michael Reese Hospital. They fell in love and married a year later in 1961, in the heart of downtown Chicago. In 1962, Suresh and his family relocated to Boulder, Colorado. There he entered the University of Colorado for doctoral studies, eventually under a NASA predoctoral fellowship. Terry helped put her husband through school by working in the operating room of the local hospital. In January 1967, Suresh received his PhD in Applied Mechanics and was offered a position as a research scientist with Corning Glass Works. His research would be focused on the thermal and mechanical properties of glasses, ceramics, and glass-ceramics. Suresh worked as a research scientist and consultant for Corning from 1967 to 2014, nearly half a century. As a loyal “company man,” he traveled frequently to solve problems, suggest design improvements, defend the company and its products, or to share his knowledge and insight. He also assisted many other companies around the world with their work. The support he received from NASA in the 1960s as a predoctoral fellow came full circle, as he collaborated with NASA many times during his career. He was involved with an impressive variety of technologies over the years, among them automotive exhaust control, optical communications, photochromic ophthalmic lenses, glass applications in space, and LCD glass for advanced displays. Suresh was the consummate teacher. Appointed a Teaching Fellow by the Society of Automotive Engineers, he taught numerous courses for them. He taught Corning’s customers worldwide, taught at local colleges and universities, and taught and tutored local students in mathematics, science, and Hindi. On occasion, he even taught about the diverse history, philosophies, and religions of India. Suresh was also a prolific writer, authoring hundreds of technical articles throughout his career. When Suresh and Terry first came to the Elmira-Corning area, there were just a handful of international families. As they built friendships with those families, several networks began to emerge, including the International Club of the Finger Lakes and the nucleus of today’s Southern Tier Indian Cultural Association (STICA). Suresh was a wonderful husband, father, and grandfather. When his wife, Terry, developed Alzheimer’s Disease in 2002, he modeled true love and cared for her the last eleven years of her life, balancing the competing demands of being an invested scientist and a devoted husband. In this country, Suresh is survived by his sons Raj Gulati (Wendy) of Elmira and their children Samir, Kiran, and Elise; Prem Gulati (Kathy) of Elmira; Phillip Davids (Reagan) of Wilmington NC and their children Nora and Esme; daughter Sonya Gulati-Brown of Poway CA and her children Tara and Sirroc. He was predeceased by his wife, Terry, in 2013. Suresh’s poor and humble beginnings in a rural village of what is now Pakistan resulted in a humility that he carried wherever he went. He was very intelligent, gifted, ambitious, adventurous, and extremely hard working. With a sense of gratitude to God for what he had been given, he truly desired to help others and to contribute in whatever ways he could to make his community and his world a better place. Suresh and Terry lived lives of service to others. For decades, they were active with Rotary International. Its motto of “Service Above Self” truly resonated with them. For those wishing to do so, please consider making a donation in Suresh’s honor to: Rotary International www.rotary.org/en/donate.

Dr. Suresh T. Gulati (1936-2020) Suresh Thakordas Gulati of Horseheads NY passed away peacefully at home, surrounded by his family, on Wednesday, May 27, 2020. He was 83 years old. A memorial service will be scheduled sometime in the future.... View Obituary & Service Information

The family of Dr. Suresh T. Gulati created this Life Tributes page to make it easy to share your memories.

Send flowers to the Gulati family.