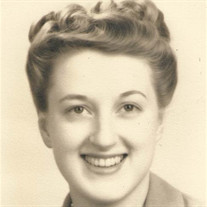 Age 104, a life-long resident of Elmira, died peacefully at Bethany Manor on the morning of July 1, with her daughters at her side. Sybil was born on May 10, 1916, the elder daughter of Charles Ewald and Alma Hade Ewald. She attended Southside High School, graduating in 1935. Sybil, always a caring and responsible person, chose to become a Registered Nurse, graduating from the Arnot Ogden School of Nursing in 1938, after which she became the Supervisor of Men’s Ward. She continued her education at Elmira College and was accepted into the Nurse Education bachelor’s program at Columbia University, but life has a way of altering our plans. During WWII she worked as an Industrial Nurse at Andover Motors. Sybil married Carl Edson in April 1943. As a student at Southside High School, little did she know that the wife of the dear principal whose death students had mourned back in 1932 was to become her beloved mother-in-law, Helen Wixon Edson. Sybil and Carl had two daughters at which point her role shifted to tending family and community. Through the years she served on the Girl Scout Council, the Board of the YWCA, PTA, and in numerous positions at Trinity Episcopal Church, including serving on Vestry, teaching Sunday School, and with Carl, serving as Youth Group Director. Later she was involved with PAL program and on the R.S.V. P. Council. She also was active in Sorosis Club and Monday Mothers. When the nest grew empty, she returned to nursing, working as a Substitute Nurse/Teacher for the Elmira City School District. Throughout her life Sybil enjoyed tending her family, her home and her garden. It was not unusual to see her out weeding behind the bushes dressed in denim overalls, back when women were not known for wearing such clothing. She also loved to travel, both the planning of it and the trip itself. Most family vacations were educational car trips to historical sites. Her favorite vacation was the one she and Carl took to Europe. Sybil was predeceased by her husband Carl, by her sister, Thelma Ewald Pecoraro and her son-in-law, Wayne R. Frigard. She is survived by her loving daughters, Judith Sheasley and Rev. Beth Frigard, both of Elmira; her grandsons, Aaron Frigard and his wife Lauren Kohne of Tucson AZ, Samuel Frigard and Nina Barnes of Athens GA, Nathan Frigard of Northampton MA; one great grandson, Noah Frigard of Northampton MA; and numerous nieces, nephews and loving friends. Judy and Beth would like to extend their heartfelt gratitude and appreciation to their Bethany Manor Family for the love and care they provided for Sybil in the last years of her life. They also extend warm wishes to other residents who befriended both Sybil and her family. A memorial service will be held at Trinity Episcopal Church at a date to be announced, followed by the interment of Sybil and Carl’s ashes in the Hade family plot at Woodlawn Cemetery. The family requests that in Sybil’s memory donations be made to the American Heart Association or to a charity of one’s choice. Sybil’s tribute wall can be signed in obituaries at www.olthof.com

Age 104, a life-long resident of Elmira, died peacefully at Bethany Manor on the morning of July 1, with her daughters at her side. Sybil was born on May 10, 1916, the elder daughter of Charles Ewald and Alma Hade Ewald. She attended Southside... View Obituary & Service Information

The family of Sybil Ewald Edson created this Life Tributes page to make it easy to share your memories.

Age 104, a life-long resident of Elmira, died peacefully at Bethany...

Send flowers to the Edson family.