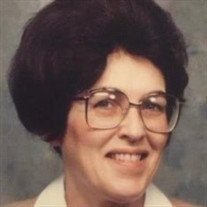 Anna Marie Mitchell of Horseheads, age 89, passed away December 9, 2020 at Arnot Ogden Medical Center due to complications from Covid 19. She was a longtime resident of Horseheads, most recently living in Bethany Village. Ann was born in Elmira, New York, daughter to the late Robert and Anna (Seeley) Jolley. She is predeceased by her husband, Thomas W. Mitchell in 1976 and daughter, Darcy Mitchell in 2015. She is survived by son, Thomas (Patricia) Mitchell; daughter, Dr. Kim (David) Panosian; grandchildren, Rebecca (Stephen) Mekos, Kathryn (Jason) Mace, Jill (Jonathan) Fay, Jenny (Craig) Maguire, Jeffrey Panosian, and Joseph Panosian; and 10 great-grandchildren. Ann was the eldest daughter, known as Sis by her seven other siblings: brothers Richard, Benjamin, Robert, Roger and sisters Virginia, Ruth, and Lorraine. Ann was born in Elmira in 1931, graduated from Elmira Free Academy and the Elmira Business Institute later in life. Ann met the love of her life, Tom, when they became neighbors after the family moved into their home in Wilawana, PA. She was a stay-at-home mother raising her three children in the Golden Glow area. Ann also worked for a short time at Panosian’s in Elmira in the uniform center. She loved spending time with her family, especially during the holidays when she was able to prepare elaborate meals for everyone to enjoy. She also enjoyed camping at local sites and traveling up and down the East Coast. Ann was accomplished at landscape oil painting, ceramics and sewing, including sewing many of the outfits that the girls wore to school. A special thank you to the entire healthcare workers, staff and administration at Bethany Village where she resided in the Courtyards and Manor during the last three years of her life. At Ann’s request, there will be no calling hours. A private family burial will take place at Forest Lawn Memorial Park next to her husband, at a later date. In lieu of flowers, the family requests any donations be made to the Salvation Army or the Food Bank. Arrangements are under the direction of Olthof Funeral Home, Elmira, NY.

Anna Marie Mitchell of Horseheads, age 89, passed away December 9, 2020 at Arnot Ogden Medical Center due to complications from Covid 19. She was a longtime resident of Horseheads, most recently living in Bethany Village. Ann was born in Elmira,... View Obituary & Service Information

The family of Anna Marie Mitchell created this Life Tributes page to make it easy to share your memories.

Send flowers to the Mitchell family.