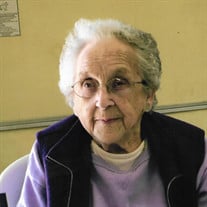 Carolyn Lucile (Card) Wright, 97, of Mosherville, PA, passed away peacefully at her home Friday, January 14, 2022, surrounded by her loving family. She was born on September 28, 1924, in Columbia Cross Roads, PA, the daughter of Henry B. and Bessie Holton Card. Troy High School, Troy, PA, was her alma mater. She married Rexford J. Wright on August 12, 1943 and they had seven children together. During her long life, Carolyn enjoyed being an integral part of the local community and was the vital root system for her family and then some. She was widowed at a young age and was known for being a hard worker, often working multiple jobs to care and provide for her family. She was one of the first bus drivers in the area, driving many students to and from Troy for 55 years without an accident. She also worked as a cook in numerous restaurants, including Masia’s in Pine City, NY. Her life motto was “You keep your nose to the grindstone”. She was an avid church goer (attended Coryland Church, Gillett, PA), a volunteer for Meals on Wheels, worked at the voting polls and once was the Republican chairwoman for Wells Township. She loved being with her Friday morning breakfast friends, helping people, cooking, bowling, playing cards, reading a good book, and spending time with her family. Carolyn is survived by her children Edgar (Cheryl) Wright of Mosherville; Candice (Curt) Tofts of Troy; Penny (Randy) Crane of Mosherville; and David (Dawn) Wright of Gillett. She is also survived by daughter-in-law Jenny Wright of Mosherville; brother Harry B. (Ann) Card of Lakeland, FL; and several nieces and nephews. Her ten grandchildren are Byron (Michele) Wright; Ginger (Roger) Lathrop; Taffy (Phil) Bowman; Michael (Mary) Wright; Robert (Brielle) Tofts; Kristine (Derek) Lyne; Kyle (Aileen) Crane; Erin (Nathan) Sterling; Autumn (Erik) Hess; Matthew (Shauna) Wright. She is also survived by 12 loving great grandchildren. She was predeceased by her parents and step-mother, Jenny Card; son Michael Wright in March 1964; husband Rexford Wright in December 1964; daughter Patricia Wright in September 2002; son Richard Wright in July 2005; great granddaughter Samantha Wright in May 1995; and sister Ida Murdock in August 2016. The family will receive friends from 4:00-7:00pm Thursday January 20, 2022 at Olthof Funeral Home 1050 Pennsylvania Avenue, Elmira, NY 14904. A private memorial and burial service will be held at the convenience of the family. Memorial contributions can be made to Coryland Church 3028 Hickory Road, Gillett, PA 19625 or Big Elm Fire Department 7744 State Route 549, Millerton, PA 16936.

Carolyn Lucile (Card) Wright, 97, of Mosherville, PA, passed away peacefully at her home Friday, January 14, 2022, surrounded by her loving family. She was born on September 28, 1924, in Columbia Cross Roads, PA, the daughter of Henry B. and... View Obituary & Service Information

The family of Carolyn L. Wright created this Life Tributes page to make it easy to share your memories.

Send flowers to the Wright family.