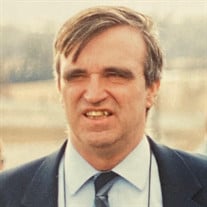 ELMIRA - James M. O’Leary, 81, of Elmira, NY passed away Friday, January 22, 2021 surrounded by his children. James, son of the late John W. and Pauline (Foote) O’Leary of Cortland, NY, is predeceased by his beloved wife, Mary (Evans) O’Leary; daughter-in-law, Kathleen (Thorneley); nephew, Brian Todd Leach; and cousin, Carl Foote Jr. (“CJ”). Jim was born in Cortland, NY Dec 4, 1939. He was the Senior Class President of the Cortland High School class of 1958. A graduate of Alfred State as an accountant, James settled down in Elmira, NY with his first job at American LaFrance. Jim was once President and an active participant in the Jaycees for nearly a decade. James also worked briefly for NY State, a well as for the Elmira Chamber of Commerce before he branched out as a small business owner. James, with business partner, Ed Westin opened up Beverage City on Broadway in Southport in the early 70’s. Jim also began OMS in the early 70s and served the payroll, income tax and resume needs of the community for 50 years. Jim developed many personal relationships with his clients over the years, many of whom considered Jim a great friend and he took great pride in maintaining his integrity in all of his work. Jim loved people and devoted himself to helping the community. Jim served as coach, treasurer and or President of the Mark Twain Little League for many years. He assisted with the creation of the Huck Finn Little League to serve the children of North Elmira. Jim started the Dunn Field Committee in 1979 which raised $250,000 to build a new roof for the stadium. He also arranged for the Mark Twain Little League coaches to volunteer to open and close the field at Dunn Field for Pioneer games in exchange for allowing the Mark Twain Senior League to play their games on the field, an arrangement that lasted many years. He started the Ernie Davis Youth Sports League by inviting kids at Hoffman Plaza to the park to play ball and forged an agreement with the Ernie Davis Center to create both a baseball and basketball program for children on the Northside of Elmira. Jim enjoyed traveling with Mary, honing his skill at the poker table, and watching football and baseball. He was a lifelong fan of the Buffalo Bills. Jim is said to have been ‘like a father’, ‘better than a father’, ‘a second dad’, a mentor and or a best friend by many people including staff, clients, neighbors, and extended family. He is survived by his brother, John (Maureen) O'Leary of Long Island, NY; children, Jeffrey O’Leary of Elmira, Kellie (Karl) McKinney of Landisville PA, Sean (Laurie) O’Leary of Charlotte NC, Polly (John) Costigan of San Diego, CA, Alan (Jackie) Cecce of Elmira, NY, Terry Drohan of Virginia Beach VA, Laurie Aguon of Virginia Beach, VA; mother of his children, Greta Malone; Sister-in-law, Virginia "Ginny" (Howard) Ellis of Elmira, NY; grandchildren, Michelle "Micker" Drohan, John O'Leary, Leticia Brand, Matt Drohan, Christopher Higgins, Patrick O'Leary, Anna King, Constance Henney, Lisa Breaker, Abigail McKinney, Nicole Cecce, Gabriel McKinney, Roque Aguon, Mollie McKinney, James McKinney, Mishal McKinney, and Mauren O'Leary; 12 great-¬grandchildren; and several nieces and nephews. Due to Covid, services will be private. A public memorial service will be held at a later date. In lieu of flowers, contributions in Jim’s memory may be made to the American Cancer Society in honor of his beloved wife. Online condolence may be made by visiting www.olthof.com.

The family of James M. O'Leary created this Life Tributes page to make it easy to share your memories.

Customized sympathy cards. Mailed for you.