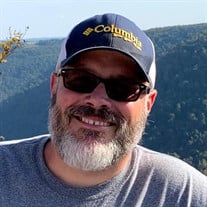 GILLETT – John Edward “Eddie” Alexander, 47, of Gillett, passed away on Thursday, January 6, 2022, surrounded by his family’s love. Born on August 14, 1974 in Elmira, NY, he was the son of the late Kenneth and Barbara (Sullivan) Alexander. In addition to his parents, John was predeceased by his sister, Cheryle (Alexander) Gee; and his fur babies, Gracie, Bernie and Diana. For more than 30 years in the automotive industry, John was known as “Eddie”. For the past 20 years, he was the Parts Manager at Elm Chevrolet. He painstakingly restored two trucks with his son, Tyler. There was not anything, John would not do for his children. He gladly drove thousands of miles to attend his children’s sporting events, college trips and sprint car races. He was a longtime seasonal camper at Tanglewood Camping RV Park in Covington, PA and cherished the time that he shared with friends and family around the campfire there. John is survived by his loving wife of 22 years, Michelle (DeLosa) Alexander; his children, Madison, Tyler and Lindsey Alexander; his sisters, Helen (Bruce) Davis, Donna (Tom) Thomas, Christine (Joe) VanGorden, Barb (Dwayne) Bolt, Kenneth (Diane) Alexander, Jr. his loving extended in-laws Allen (Diana) Delosa, Allen (Andrea) DeLosa, Michael (Annette) DeLosa, Denise (Kris) Howland, He was truly part of the DeLosa family; his close nephew, Bruce (Stacey) Pipe; many nieces and nephews who he loved; as well as his fur companions, Sophia, Murphy and Frankie. Friends may call from 4-7:00 pm on Thursday, January 13, 2021 at Olthof Funeral Home, 1050 Pennsylvania Avenue in Elmira with a service immediately following at the funeral home. Flowers will be provided by his family. He will be missed by many, but none greater than his family

The family of John Edward "Eddie" Alexander created this Life Tributes page to make it easy to share your memories.

Send flowers to the Alexander family.