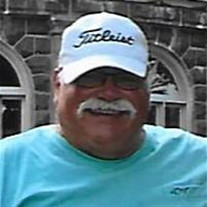 Was born August 18, 1950 in Elmira, passed away very unexpectedly on Tuesday, January 28, 2020. He is survived by his loving family: wife, Carol (Harvey) Pendleton, along with children: Shannon Stemerman (Doug Bellinger), with children: Chloe and Jack; Michael & Shannon Pendleton, with their children: Michael, McKayla, Evan & Abbi; sisters: Bonnie Ohart, Suzanne & Rick Norman; brother: Richard Pendleton; sister-in-law: Linda & Lewis Elia; along with several nephews, great nieces and great nephews. John was preceded in death by his parents: Herman & Jeannette Pendleton, father-in-law & mother-in-law: William & Arlene Harvey; brother-in-law: Samuel Ohart. John was retired from Eastern Metal as Vice President of Manufacturing with over 40 years of service. Anybody who knew him, knew that his favorite place was the Elmira Country Club, playing golf every day he possibly could. He loved watching his grandchildren's sports events and never missed a game. He was known as the Mayor, as he loved talking with anybody even if he didn't know them. As he always said, "One more and we'll all go!" The family’s Funeral Service honoring John will be held at the Olthof Funeral Home, 1050 Pennsylvania Ave., Elmira/Southport, NY on Saturday, February 1, 2020 at 12:00 (noon). Pastor Jim Stearns will officiate. The Pendleton family requests that all of John's friends join them to continue the celebration of his life at Bernie Murray's, 500 South Main Street, Elmira, from 1:00 to 4:00 pm, on February 1, 2020, where everyone will be encouraged to eat a few of John's favorite chicken wings and toast a cold one in his memory. In lieu of flowers, memorial donations may be directed to the 1st Tee Program, 1 West Market Street, Corning, NY 14830 or to the Chemung County Humane Society and SPCA, 2435 State Route 352, Elmira, NY 14903 in his memory. John's tribute wall can be signed in obituaries at www.olthof.com

The family of John J. Pendleton created this Life Tributes page to make it easy to share your memories.

Send flowers to the Pendleton family.