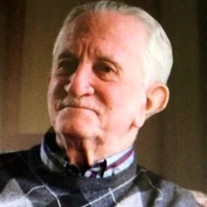 Joseph Hanley was born December 22, 1924 in Somerville, MA to Lawrence and Estella Hanley (Ramey). A great deal of Joe's childhood was spent in Somerville, a suburb of Boston, with his older sister, Mary. Joe's dad was a salesman by trade, and moved to the Boston area from Nova Scotia, Canada. At the age of 12, Joe began his working career at a local ice company. When he was not working at the ice company, or for a local doughnut shop, he was playing baseball and running track. Joe graduated from Somerville High School, and joined the U.S. Navy, May 6, 1943 as a cook. Joe's enlistment in the Navy started with his training at Newport Navel Station. He was assigned to the Battleship U.S.S. New York, in the Atlantic Ocean. He then transferred to the Battle Cruiser U.S.S. Alaska. He saw battles in the Philippines, Okinawa, and Iwo Jima. Joe was honorably discharged on December 21, 1945. While in the Navy, Joe met "Babs" Fitzpatrick. The couple met through one of Joe's "sailor buddies", who asked Joe to stand up for him at his wedding in Norfolk, VA. Babs was standing up for the bride-to-be, and the two hit it off. The couple was married on July 22, 1944 in North Carolina. Joe and Babs would later have two children; a daughter, Joann, born October 16, 1953, and a son, Larry, born October 6, 1959. Joe worked for American LaFrance for about five years, when he learned of an upcoming police exam. Joe admits that even as a small child, he always wanted to be a police officer, remembering vacationing with his family in Nova Scotia, and watching the Canadian Mounted Police. Joe took the test and was sworn in as a member of the Elmira Police Department on April 1, 1954. During his time with the Elmira Police Department, Joe filled in as a court officer, but spent most of his time driving and walking posts. Joe earned 10 Chief's Commendations, and several other awards and honors during his career. In 1965, he won the B'Nai B'rith for outstanding policemen. He would again be awarded it in 1976, for saving a woman's life. Joe retired December 31, 1986, after 32 years of service. Joe passed away peacefully, on December 12, 2018 surrounded by his friends and great extended family. He is predeceased by his wife, Babs; his daughter, Joann; and his son, Larry. He is survived by his loving daughter-in-law, Mimi, and all of his adopted grandchildren. A memorial service will take place Sunday, December 16, 2018 at the Olthof Funeral Home, 1050 Pennsylvania Ave, Elmira, NY 14904. Burial will be Monday, December 17, 2018 at St. Peter & Paul's Cemetery, with full military honors. Special thanks to his special friends: Candy, Mr. Oaks, and the mailman, Justin. A thank you also, to the staff at Carefirst, for their loving care.

Joseph Hanley was born December 22, 1924 in Somerville, MA to Lawrence and Estella Hanley (Ramey). A great deal of Joe's childhood was spent in Somerville, a suburb of Boston, with his older sister, Mary. Joe's dad was a salesman by trade, and... View Obituary & Service Information

The family of Joseph L. Hanley created this Life Tributes page to make it easy to share your memories.

Send flowers to the Hanley family.