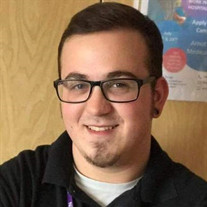 Matthew Alexander Vieira Was born August 9, 1996 in Elmira, NY the beloved son of David A. and Lisa C. (Jerzak) Vieira, passed away very unexpectedly on Wednesday, April 3, 2019 at the age of 22. His brother, Michael James Vieira, preceded him in death. Matthew is survived by his loving parents, David and Lisa; beloved brothers, Nicholas Vieira and Luke Vieira at home; maternal grandparents, Charles "Pop Pop" and Peggy "Panka" Jerzak; paternal grandparents, Robert and Anne Vieira; uncle, Michael James Vieira; aunts, Kimberly (Bernie) Rollins and Catherine Vieira; uncles, Daniel Vieira, George Vieira and Les (Rose) Jerzak; along with many special cousins and a host of other relatives and friends. Matthew graduated from Southside High School in 2014. He was currently employed with Navient Corporation in Horseheads, NY. As a youth, Matthew participated in marching band, played on the drum line, and appeared in several theatrical productions from middle school through high school. Matthew was passionate about his friends and their love of music, especially his favorite band, The 1975. He was an excellent singer, and had many sold out performances with friends...in his car...singing at the top of their lungs. He would often accompany his own singing by playing his ukulele. Matthew was a caring individual who constantly put the needs of others before his own. Family and friends are invited to gather at the Olthof Funeral Home 1050 Pennsylvania Ave. Elmira/Southport, NY on Wednesday, April 10, 2019 from 4:00 to 7:00 pm. Funeral Services celebrating his life will take place on Thursday, April 11th at 2:00 pm in the Millerton Wesleyan Church 5174 Main Street Millerton, PA. Reverend Laurie Greenlaw will officiate. Interment will take place at the convenience of his family.

The family of Matthew Alexander Vieira created this Life Tributes page to make it easy to share your memories.

Send flowers to the Vieira family.