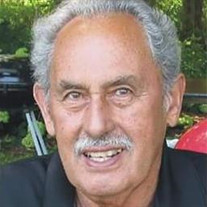 Richard "Dick" Charles Freeman beloved husband, father, grandfather, great-grandfather, brother, uncle, and friend, age 82, a longtime resident of Lawrenceville, PA, went to be with his Lord and Savior suddenly on Saturday, September 14, 2019, at home. Dick was born on July 2, 1937 in Canton, PA. He grew up in Granville, Pennsylvania and graduated from Troy High School in 1956. He met Christine Updike at the Pentecostal Tabernacle in Elmira, NY. They were married on May 4, 1957. Dick was skilled at a variety of occupations including carpentry and construction, auto body repair, auto mechanics, mobile home hauling, weights and measures inspection, and more. In 1986, he founded R.O. Services, an optical comparator calibration services company, and was active as a technician in this field for over 30 years. Dick served on the Northern Tioga School District (Pennsylvania) board for 20 years. For over 60 years, he was a member of the Pentecostal Tabernacle, later renamed Elmira Christian Center, of Elmira, NY where he served for many years as a board member and usher. He painted most of the buses the Pentecostal Tabernacle used (red and yellow) for their bus ministry. Dick was a fan of traditional Southern Gospel quartet music, attended numerous concerts, and became long-term friends with many of its artists. He mastered the art of joke and storytelling and was hard to beat at a game of checkers. He bridged the miles between family and friends by maintaining regular telephone contact. He was also a long-term member of the NRA and an avid listener to Rush Limbaugh's radio talk show. He is survived by Christine (Updike), his loving wife and caretaker of 62 years, and their nine children: LaVerne (Kathleen) of Lorain, OH and Cheryl (Rarrick), mother of their children: Mark, Jennifer (James) Jordan, Julie (Anthony) Moody, Katrina (Grant) Ralston, Sharon (Trenton) Blanton, Cheryl Anna (Jesse) Neal; Roberta of Hummelstown, PA; Anita (Jim) Lockwood of Little Falls, NY and their children: Craig (Dana), Eric, Ryan (Olivia), and Jeremy; Nina of Pine City, NY and Jack Kelley, father of their children: Shawn and Adrianna; Thomas (Shona) of Chesterfield, VA and their children: Brittany (Gabe) Nichols, Jared (Alicia), Desiray (Jordan) Osier, and Geneva; Stanley of Warren, OH; Harold (Dollie) of Richmond, VA and their children: Cassondra, Micah, Mathias, and Manoah; Glenn of Harrisburg, PA; Grace (Eric) Updike of Jonesborough, TN and their children: Trent, Anna, and Corey; 19 great-grandchildren; brother, Robert (Ruth) of Kinston, NC. He was preceded in death by his grandparents, Herbert and Jennie Larcom, and parents, Floyd and Eleanor Freeman, sister-in-law, Sonia (Buck) Freeman; along with several nieces, nephews, other relatives and many friends. Family and friends are invited to call from 3:00 - 6:00 pm on Saturday, September 28, 2019, at Elmira Christian Center, 235 E. Miller Street, Elmira, NY 14904. A "Celebration of Life" service will be held at 3:00 pm on Sunday, September 29, 2019, at Elmira Christian Center. Pastor Matt Bedzyk is presiding with other invited pastors. Internment will take place on Monday, September 30, 2019, at 11:00 am in Lower Gillett Cemetery, Gillett, PA. In lieu of flowers, memorial donations in the name of Richard Freeman may be directed to the Elmira Christian Center, 235 E. Miller Street, Elmira, NY 14904. Donation envelopes will be available at the services. Olthof Funeral Home of Elmira/Southport, NY is assisting the family with the arrangements.

The family of Richard "Dick" Freeman created this Life Tributes page to make it easy to share your memories.

Send flowers to the Freeman family.