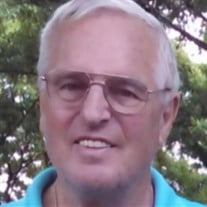 Theodore Frederic “Ted” Dickerson was welcomed into Heaven with his wife and daughters by his side on Friday, November 5, 2021, after a courageous battle with cancer. Ted was born November 11, 1940, in Greenport, NY, to Nina Louise (Von Fischer-Benzon) and Herbert Otis Dickerson. He graduated from Shelter Island High School in 1959 and attended SUNY Farmingdale before joining the Air Force in 1960. He was with the Strategic Air Command at Topeka, KS, specializing in Fire Protection. He then worked for Republic Aircraft on Long Island. He was a foreman at Remington Rand in Elmira, NY, before becoming a Chemung County Deputy Sheriff from 1971 to 1987. Ted also worked for Olthof’s Funeral home for several years during this time. He left the department to accept employment with the New York City District Council of Carpenters, Benefits Fund as an Investigating Auditor. He was also employed as a Security Supervisor at the Indian Point Nuclear Facility and with Reader’s Digest Corporation Security before retiring from Wackenhut Security at IBM Headquarters in Armonk, NY. After just a short time at IBM, he was promoted to the sole position of security at the Vehicle Control Facility and helipad from 1997 to 2008. Ted volunteered with the Arctic League in Elmira, NY, for several years and with the Yates County Meals on Wheels in his retirement. He was a member of the Shelter Island, NY, and Horseheads, NY, American Legions as well as the Sons of the American Revolution. Ted was also a proud member of the Fraternal Order of Police, Lodge 704. He was a past member of the Southport Volunteer Fire Department and the Elmira Corning Regional Airport Fire Department. Ted was formerly very active with the Town of Southport Recreation Commission, formerly serving as both a member and past chairman. He was a former member of the Fraternal Order of Eagles, a member of the Mechanics Club in Montour Falls, NY, for several years as well as a past member and treasurer of the Chemung County Sheriff’s Association. He was a past member and Secretary of the Elmira Jaycees and a member of the Tennessee Squires Association. Along with his parents, Ted was predeceased by his son, Theodore Frederic Dickerson, Jr., his sister, Kathyrn Springer, and his brothers Neil Otis Dickerson and David Herbert Lawson. He is survived by his loving wife of seven years, Ann Edwards-Dickerson; daughters Lynn (Joseph) Sullivan and Barbara (Andrew) Degnan; sisters Jane (Frank) Fowler and Jean Dickerson (Flo Hosp); brothers-in-law Gregory (Phyllis) Edwards and Thomas (Judy) Edwards; grandchildren Megan Greatsinger (Matthew) Zorovic, Amanda Greatsinger (Nicholas) LaLonde, Andrew Degnan, Jr., and Taylor Degnan; step grandchildren Deven, Lauren, and Ashley Sullivan; and many cherished nieces, nephews, and cousins. Ted is also survived by Terry Driscoll, his treasured friend for over 50 years. Ted enjoyed kayaking, "clamming" on Shelter Island, and attending yearly “Old Goats” cousins’ reunions. He was an avid "geocacher," finding 1040 geocaches over a 14 year span from 2007 to 2021. Ted loved music and had a beautiful singing voice. He learned to play the tuba and the drums at a young age. He also took up hunting and golf in his youth and worked as a caddy at the golf course on Shelter Island while in school. He hit the links with friends and family often throughout his entire life. Ted was raised on Shelter Island, a secluded island filled with natural beauty near the end of Long Island, NY. Some of his family still resides there today, and he returned to the island as often as he could. He enjoyed learning about his ancestry and passed valuable information on to his daughters. Ted was quite proud of his advancement in the Boy Scouts of America on Shelter Island including being an Arrowman in the Order of the Arrow (OA). He was the first Boy Scout from Shelter Island to complete an OA Ordeal. Ted strived to become an Eagle Scout, but was unable to achieve this goal, as no one local to him taught the “Citizenship in the Nation” Eagle-required merit badge. This made Ted even more proud to be at the dedication ceremony of his grandson, Andrew’s, 9/11 Memorial Eagle Scout Project on 9/11/2021. He had a vibrant personality, frequently organizing get-togethers and always the life of the party. Ted was always willing to lend a hand and prided himself on being a role model for children, even participating in the PAL program as a child mentor. He had a great sense of humor, a beautiful smile, and a tremendous love for his family. Family and friends are invited to call at the Victory Church Elmira Campus, 1100 South Main Street, Elmira, NY, on Saturday, November 13, 2021, from 4:30 – 6:30 PM. A memorial service will immediately follow at 6:30 PM. Ted will be laid to rest with full military honors in the columbarium wall at Woodlawn National Cemetery in Elmira, NY, on Tuesday, November 16, 2021 at 11:00 AM. A celebration of life will be held on his beloved Shelter Island at the family’s convenience at a later date. As per Ted’s wishes, his ashes will be interred at both Woodlawn National Cemetery and the Shelter Island Cemetery. Those wishing may make memorial donations in Ted’s name to the Shelter Island Historical Society, American Cancer Society, or Alzheimer’s Association.

Theodore Frederic &#8220;Ted&#8221; Dickerson was welcomed into Heaven with his wife and daughters by his side on Friday, November 5, 2021, after a courageous battle with cancer. Ted was born November 11, 1940, in Greenport, NY, to Nina Louise... View Obituary & Service Information

The family of Theodore F. Dickerson created this Life Tributes page to make it easy to share your memories.

Theodore Frederic “Ted” Dickerson was welcomed into Heaven with...

Send flowers to the Dickerson family.