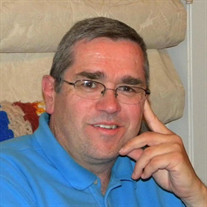 Not sure what to send?

PENN YAN – Thomas Arthur Bennett, 63, of Penn Yan, died on Sunday, January 9, 2022 after a long courageous battle with cancer. Born in Elmira, NY on August 30, 1958, he was the son of (Leona) Jane (McClure) Bennett and the late Durland E. Bennett. He was a 1976 graduate of Southside High School and graduated from Corning Community College and SUNY Brockport. For the past 10 years, he was employed by Dundee Central School as their IT Services Technician, as well as serving as announcer for many school events from sports to plays. Prior to that, he was employed by Keuka College in IT Services. He had worked for Peerless (AEtna) Insurance in Elmira and later in Syracuse, where he also worked in Customer Service at the Carousel Center. He developed his love for announcing early on, first in high school and then while working as a DJ in a local radio station. His love and extensive knowledge of sports, especially baseball was well known among all who knew him and he was the #1 fan of any of his extended family or friends participating. He was a long-time sports participant and then coach for Southport Recreational Baseball. He was a life-long fan of the St. Louis Cardinals and often enjoyed attending Elmira Pioneers games. His love of sports extended from the Blue Bombers fantasy baseball team to announcing multiple events at Dundee Central School and Keuka College. He quickly became known as the voice of Dundee Central School. Thomas was an active member of the Bennett-Thomas family reunion committee and took great pride in managing the family Facebook page, compiling the annual Veteran’s Day Tribute, He also compiled the 6th grade graduation and high school graduation presentations at Dundee Central School. Tom was one of those rare individuals who touched the lives of all he knew. He was genuinely humble and kind and he always had a word of encouragement and a smile for everyone. He was the family comedian, and his wit will be sorely missed. In addition to his father, he was predeceased by his sister, Pam (McClure) Sigmon Pitman; and his niece, Deborah (Sigmon) Cordry. He is survived by his mother, (Leona) Jane Bennett; his siblings, James Bennett, Lucinda Bennett, Sue (Mark) Canale; his nieces and nephews, Janet Nordin, Kevin Bennett, Michael Bennett, Gianna Canale, Marlee Canale, Kendra Canale, John Sigmon, Matt (Lindsey) Sigmon, Jennifer Kapp, Amanda (Chris) Horton, his aunts, Betty Cooper, Betty Bennett, Barbara McClure, Nancy Mullen, Connie McClure; his uncle, Stan Coole; a host cousins and other relatives and many friends whom he considered family. Friends may call from 1-3 pm on Saturday, January, 22, 2022 and from 2-3 pm on Sunday, January 23, 2022 with a memorial service to follow at Olthof Funeral Home, 1050 Pennsylvania Avenue in Elmira. A memorial service celebrating and honoring his life will be held at Dundee Central School in the spring. In lieu of flowers, contributions in Tom’s memory may be made to the Dundee Central School for the Tom Bennett Memorial Appreciation Award at 55 Water St., Dundee, NY 14837; or in his name to the JDRF Greater Delaware Valley Chapter, 555 Croton Rd, Suite 111, King of Prussia, PA 19406.

The family of Thomas Arthur Bennett created this Life Tributes page to make it easy to share your memories.