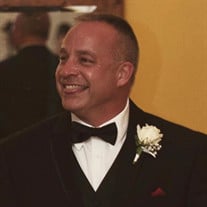 Timothy S. Harris Sr., age 48, of Horseheads, NY was born February 6, 1970 in Elmira the son of Howard A. and Barbara A. (Bailey) Harris passed away at his home on Friday, December 28, 2018, surrounded by his loving family after a courageous battle with cancer. He was preceded in death by his mother Barbara; mother and father-in-law, Patricia & Ronald Cram. Tim is survived by his loving wife of 30 years Kimberly; beloved children: son, Timothy S. Harris Jr.; daughter & son-in-law, Rebecca & Michael Nelson; with his first grandson due in May; his father, Howard; siblings: Linda (Lou) Rubin, David (Mary) Harris, Iva (Gerry) Flewelling, Susan (Mark) Cicci and Michael Harris; sister-in-law: Brenda (Dale) LaBell; along with several nieces, nephews, cousins and many friends. SFC Timothy S. Harris Sr. retired from the United States Army Reserve after 20 years of dedicated service. He was a highly decorated combat veteran, activated for both Operation Desert Storm (1991) and Operation Iraqi Freedom (2004-05). SFC Harris most cherished his Bronze Star and Combat Action Badge; which were awarded for actively engaging the enemy during Operation Phantom Fury in Fallujah, Iraq. Timothy rose to the rank of Sergeant First Class (E-7) and will be remembered as a skilled Combat Engineer, accomplished Drill Sergeant, advanced Firearms Instructor and a true American Patriot. Tim retired as Sergeant from the New York State Department of Corrections at the Southport Correctional facility in 2018. He was also Sergeant in charge of the Southport Corrections Honor Guard and a weapons training officer for the facility. Tim was respected and admired by many. Tim enjoyed his cars, riding his motorcycles, loved camping, enjoyed traveling and spending time with his family and friends. His family and friends are invited to gather at the Olthof Funeral Home 1050 Pennsylvania Ave. Elmira/Southport, NY on Wednesday, January 2, 2019 from 3:00 to 6:00 pm. He will be laid to rest in the Bath National Cemetery at the convenience of his family where Military Honors will be accorded to SFC Harris.

Timothy S. Harris Sr., age 48, of Horseheads, NY was born February 6, 1970 in Elmira the son of Howard A. and Barbara A. (Bailey) Harris passed away at his home on Friday, December 28, 2018, surrounded by his loving family after a courageous... View Obituary & Service Information

The family of Timothy S. Harris Sr. created this Life Tributes page to make it easy to share your memories.

Send flowers to the Harris family.