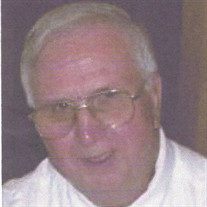 PINE CITY - Eugene F. Conklin, age 84 of Pine City, NY entered into the arms of his Savior on Sunday, November 7, 2021. He was born in Port Jervis, NY on January 22, 1937. Gene was the son of the late Foster & Cordelia Conklin. He comes from a large, loving close-knit family. He was one of 9 children. He is survived by his wife of 63 years, Shelba (Lowery); by his children, Mark (Lynn Adair) Conklin of Mounds, OK, Bonnie (Paul) Coddington of Endwell, NY, Timothy (Kim) Conklin of Ocala, FL, and his heart-adopted son, Michael Crowley of Elmira, NY; by his sisters, Lucille Millspaugh of Houston, TX, Dorothy Hood of Franklinton, NC, Karon Johnson of Horseheads, NY; and by his brother Jerry Conklin of Lacey, WA; by his sister-in-law Cartha Conklin of Dundee, NY, and his sister-in-law & brother-in-law Chris & Steve Cantwell of Bath, NY; by his grandchildren, Timothy II Conklin and William Coddington; by his great-grandchildren, Jayden, Rayna, Ava, and Emerson; by his many nieces, nephews, great-nieces, and great-nephews; and by his many friends. Gene was predeceased by his grandson, Kamron Conklin. Gene graduated from Horseheads High School in 1955. Later in life, he went on to receive an Associate Degree in Business Administration from Clark County Community College, Vancouver, WA. Gene joined the U.S. Air Force in 1956, serving as a Telecommunication Central Operations-Secured Communications Officer in Everett, WA, Lockport, NY, Marshall Islands, Japan, Washington, D.C., American Samoa, Belgium, and Plattsburg, NY. While serving in American Samoa, he served as the O/L (Operation Location) Commander for NASA’s Apollo 13 Recovery Team. He and his team provided the much-needed communication link between the astronauts and NASA. For his service, he was awarded the O/L Commander of the Year from the 1956th Communication Group for Meritorious Service. He was also stationed at S.H.A.P.E. (Supreme Headquarters Allied Powers Europe). While there, he was responsible for the secure communication of a Detachment out of Germany. In 1976, after 20 years of service, Gene retired from the U.S. Air Force. Gene frequently held a second job while serving in the military. His children especially loved when he worked as the S.H.A.P.E. Base movie theatre manager. It meant free movies and popcorn. While living in Belgium, Gene and his family enjoyed traveling around Europe. During this time, Gene enjoyed buying and selling antiques. Upon retiring from the U.S. Air Force, he joined the U.S. Post Office, where he remained until his retirement in 1998. He worked as a supervisor at the Distribution Center in Elmira, at the Post Office in Rochester, NY, and as the Fleet Coordinator while in Portland, OR. Gene was a member of the local Nazarene churches, where he gave much of his time and energy. He was a proud member of The Gideons International, helping to distribute many Bibles to the local community. Serving the Lord was his greatest joy!! Gene was someone you could always turn to in a time of need. He will be missed by his family and friends. We as a family take great comfort in knowing that we will meet again and together worship at the feet of our Savior, Jesus Christ. At Gene’s request, there will be no hoopla. There will be a celebration of life at the convenience of the family. In lieu of any hoopla, memorial donations can be given to The Gideons International (https://www.gideons.org), the Grace Church of the Nazarene (Horseheads, NY), or the First Church of the Nazarene (Elmira, NY). Online condolences may be made by visiting www.olthof.com.

PINE CITY - Eugene F. Conklin, age 84 of Pine City, NY entered into the arms of his Savior on Sunday, November 7, 2021. He was born in Port Jervis, NY on January 22, 1937. Gene was the son of the late Foster & Cordelia Conklin. He comes from... View Obituary & Service Information

The family of Eugene F. Conklin created this Life Tributes page to make it easy to share your memories.

Send flowers to the Conklin family.