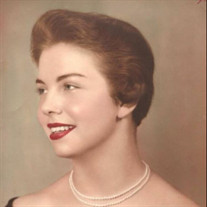 Winifred Ursula (Gardner) Watts, who was called Winnie, went to be with the Lord on Saturday, Aug. 18, 2018 at the age of 80 at St. Joseph’s Hospital in Elmira, New York surrounded by her loving family. She was born in Burdett, New York -- along with her twin brother, Wilfred -- on Feb. 13, 1938. She is predeceased by her mother, Lottie A. (Gardner) Chido and brother Wilfred. She is survived by the love of her life, Harold K. Watts; children Mike Watts (Vicki Rachel), Mark Watts, Barbara Miller (Timothy) and Charlene Watts; grandchildren Anthony Popkin (Thia Popkin), Lottie Mae Watts, Nathan Watts and Gemma Decker; and great-grandchildren Ezrah Popkin and Urijah Popkin; as well as sister Loretta McKeehan and many special friends. Winnie married Harold K. Watts on Dec. 28, 1957 at Oakwood United Methodist Church in Elmira Heights, New York. She met him at a block dance, and as the story goes, Harold was holding another girl’s pocketbook at the time. Of course, Winnie couldn’t let that go without striking up a conversation. By the end of the evening that summer of 1956, he offered to give Winnie and her friends a ride home. Even though the friends lived further away, Winnie convinced Harold to drive the long way around, so she could get dropped off last. After that, they rode next to each other and talked with each other and sang and danced together at every chance they could for more than six decades. A 1956 graduate of Thomas A. Edison High School in Elmira Heights, Winnie was a cheerleader who was known for her jokes and her smile. Her favorite subject was history, and in addition to her studies and many extracurricular activities, she worked as a bus girl at Pierce’s Restaurant. Upon graduation, she attended nursing school in Syracuse, New York. Throughout the years, she stayed connected with her high school classmates, and those bonds strengthened as she helped plan their 50th reunion. In recent years, Winnie delighted in spending more time with her classmates. After the reunion, the group stayed in touch through monthly meetings, newsletters, picnics and other events. She often remarked at how much joy they brought to each other. Winnie was known best for her positive spirit, always showing infectious, cheerful energy. She dedicated her life selflessly to others, with her more than two decades of work as a nurse at St. Joseph’s Hospital in Elmira, and as a devoted mother of four children, grandmother to four and great-grandmother to two. She worked alongside her husband Harold as co-owner of Watts Real Estate, and later, Parkside Apartments and Maple Avenue Antiques. She volunteered with New Beginnings Methodist Church, Emmanuel Episcopal Church, the TAE Class of 1956, Southport Business Association, Southport Recreation, Christmas Land and the PTA. She was a founding member of the Brand Park Beautification Committee, and along with her husband, was the force that helped revitalize Brand Park and the surrounding neighborhood -- cleaning up trash, planting flowers, securing funds to build a bandstand and pavillion, bringing free concerts to the park for the community to enjoy, and since the early 90s, organizing the season’s signature event, the Olde Tyme Summer Festival. Calling hours will be on Thursday, Aug. 23 from 11 a.m. until 1 p.m. at New Beginnings Methodist Church (300 E. Miller St., Elmira, NY), followed by the church service and then burial at Fitzsimmons Cemetery. Family and friends are invited to gather afterwards at New Beginnings to continue to celebrate her life. In lieu of flowers, donations may be made to the Brand Park Beautification Committee, New Beginnings Church or the SPCA.

Winifred Ursula (Gardner) Watts, who was called Winnie, went to be with the Lord on Saturday, Aug. 18, 2018 at the age of 80 at St. Joseph&#8217;s Hospital in Elmira, New York surrounded by her loving family. She was born in Burdett, New York... View Obituary & Service Information

The family of Winifred Ursula Watts created this Life Tributes page to make it easy to share your memories.

Send flowers to the Watts family.